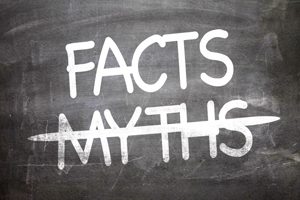 Take it from professional plumbers: there’s a lot of myths out there about plumbing and how it affects your property – whether it be a home or business. Some myths are just silly, like “toilets flush the opposite direction in Australia.”  But believing in other myths, can lead to plumbing repairs.

Below we bust some of the most common plumbing myths. And no, water does not drain the opposite way in the southern hemisphere (although there are exceptions!)

Myth 1: “I don’t have to worry about a leaking faucet.”

Actually, you do. If you believe this, however, you’re not alone. This myth may be the one we as plumbers have to correct the most. It’s easy to think that a little drip from the faucet isn’t a big deal but the fact is, over time, that little drip can cost you big money. The average leaking faucet costs homeowners the equivalent of about 250 loads of laundry.

Myth 2: “My house could blow up because my hot water heater is rumbling.”

Relax. Your hot water heater isn’t a ticking time bomb, even though it may sound that way. If it sounds like it’s going to explode it’s likely due to sediment that has built up inside the tank. When you hear rumbling or rattling, it’s time to get the hot water heater cleaned. If you ignore this, the hot water could simply stop working.

Myth 3: “Pouring hot water on grease will help it go down the drain.”

Never pour grease down the drain. Ever. If you do, it can lead to serious, extensive damage to your plumbing. Using hot water to clear the pipes after you dump grease down them just doesn’t work because once the grease solidifies it can harden on the pipes. By the laws of chemistry, oil, grease, and water don’t mix. And that goes for your plumbing as well..

Myth 4: “My plunger will clear the clogged drain.”

Well, maybe. This one is half-myth. While plungers are indeed effective to clear a backed up sink or bathtub, they should not be used once you pour drain cleaner down the drain. That’s because these cleaners contain powerful, potentially harmful chemicals that shouldn’t be pulled back up a drain. Doing this can cause injury if the cleaner splashes, and can damage the pipes as well.

Myth 5: “The package says these wipes are flushable, so they must be.”

Never flush wipes down the toilet, no matter what the packaging claims. Wipes aren’t toilet paper; they aren’t made from material that breaks down in the drain. The same goes for sanitary napkins, cotton swabs, and that “flushable” cat litter, too.

Myth 6: “I’ll save money by putting a brick in my toilet.”

Nice thought, but putting a brick in the toilet tank won’t help your pocketbook. The idea behind this one is that a brick will make the toilet use less water, but that’s not true. If you’re concerned your toilet is using too much water it may be time to invest in a new one or call a plumber to find and fix the problem.

Myth 7: “These ice cubes will sharpen the blades in my garbage disposal.”

Ice cubes are great for keeping your drinks cool, but they should never be used in the garbage disposal. First off, disposals don’t have blades, but rather impellers, which operate similar to teeth. They grind solids rather than cut the way a blade would. Putting ice cubes down a garbage disposal will cause damage and, at worse, stop it from running at all.

It would be great if all you needed to save water was a brick in the toilet, and those wipes really were flushable, but as a general rule: If it’s too good to be true, it probably isn’t. When in doubt, don’t believe the myths – call a plumber.